I picked Poppy as the Mystery Meet restaurant because I had yet to try the popular spot that’s been on my hit list for months. I also wanted to see what Poppy’s Executive Chef Jerry Traunfeld was up to since leaving The Herbfarm.

I love surprises. And as host of the recent Mystery Meet dinner in Seattle, my expectations were blown away by the food and service at the secret restaurant I picked – Poppy.

If you haven’t heard of Mystery Meet the concept is simple, a gathering of foodies who come together to eat at an undisclosed restaurant. The day before, guests were alert that Poppy was the restaurant I picked for this Mystery Meet adventure.

Ten of us met at Poppy, located at 622 Broadway E., Seattle on April 2. Photo by Christine Willmsen 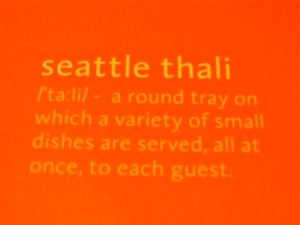 I picked Poppy for a variety of reasons. First, I had yet to try the restaurant and it has been on my hit list for months. I also wanted to see what Poppy’s Executive Chef Jerry Traunfeld was up to in the kitchen since leaving The Herbfarm. While Poppy has received high marks from food reviewers, I wanted to taste what it was all about.

With Poppy I realize you need to come hungry because it serves food Thali style. Thali means a round tray on which a variety of small dishes are served, all at once, to each guest. I started the evening with an amazing cocktail called Wild about Saffron – it mixed vodka, brandy and rose water with hints of lemon, saffron and angostura. Others in the group had wine and the Bourbon Sour that was topped with egg white.

Crunchy, savory appetizers for all

Dinner started with three appetizers: eggplant fries with sea salt and honey, spiced fig and onion tart with blue cheese and sage and spice crispies. The crispy and rich tart disappeared quickly among the group.

Spice crispies at Poppy restaurant are a great start to dinner.

I think the biggest challenge when going to Poppy is deciding what to eat. While there are only four choices, what you get with your four choices is mind-boggling. Keep in mind your main entrée includes six other smaller bites of about two ounces each of food.

I picked black cod with carrot sauce and cucumber shiso salad. The silky cod was cooked perfectly and the cucumber salad gave you a small crunch with every bit of fish. But that was just part of the main entrée. Along with the fish, an array of small bowls and dishes appeared on the large plate. My favorites on the plate were: the nettle and mushroom soup that had a smooth and earthy texture, grilled radicchio, leek and lentil salad, and delicata squash with black-eyed peas with berbere.

The black cod with carrot sauce and cucumber shiso salad came with six other small bowls of food. My favorites were the lentil salad and the nettle soup. Photo by Christine Willmsen

Others in the group raved about their dishes. What’s great about foodies is that we love to share. In the case of so many great small dishes, it was nice that strangers were okay with others trying their food. The lavender-rubbed duck leg fell of the bone and was laced with rhubarb and angelica. The celery root ravioli with maitake mushrooms melted in your mouth with an unbelievable filing that had a creamy flavorful texture. It didn’t hurt that truffle butter lightly coated the ravioli. All the main entrees were served with nigella-poppy naan.

Don’t be afraid to ask the server what some of the ingredients are and how they taste. The staff is very knowledgeable about this infusion of Indian cuisine with other worldly flavors.

With 10 choices for dessert, picking a sweet finale can be a fun challenge

Midway through the meal guests moaned and groaned – in the pleasurable way of course. Once dessert hit I was already full, but like a true foodie I was able to find some room in my stomach.

This tart and creamy japanese cheesecake was just one of several desserts offered at Poppy. The green pebbles are matcha coated in white chocolate. Photo by Christine Willmsen

I tend to go for the most interesting dessert – so I chose the Japanese cheesecake with passion fruit sabayon and matcha crumble.  The airy cheesecake, tart sabayon and the matcha (green tea) rolled in white chocolate made every mouthful a worthy bite. Others enjoyed the strong flavor of the ginger cake with vanilla ice cream, blood orange and candied olives. 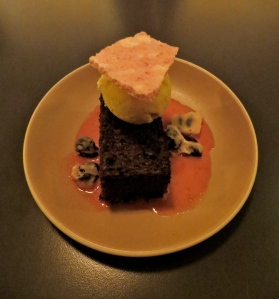 If you think this restaurant may not be for you because you are dining alone – well think again. Poppy has a fantastic bar where you can eat smaller plates that’s perfect for one person and they offer a great happy hour. Try the grilled smoke trout and the fig blue cheese tart, each are $10 or less.

About The Solo Cook

An award-winning journalist with a passion for food. A writer and speaker who hopes to inspire everyone to take adventures with food. If I'm not cooking, I'm not happy. I started this blog to inspire single people out there to cook and experience food.
View all posts by The Solo Cook »
← An invitation to explore a great Seattle restaurant – the location is a surprise
Quick tips to make your tomatoes grow →