This Cooking Competition was a Live Challenge Like No Other

It’s one of those memorable lifetime experiences – a moment that’s over before you know it. That’s how it felt to participate in a cooking competition at a four-star restaurant in Seattle.

The competition – Kitchen Circus – brought nine home cooks together to test how we could handle stepping into the professional kitchen at Rover’s restaurant and serving food for up to 50 people. Three of us competed each night, making an amuse bouche and one course, with only one person moving onto the finale.

But what was this Solo Cook thinking. Usually I’m creating recipes perfect for one person and telling followers what hot spots to dine at in the Seattle area. 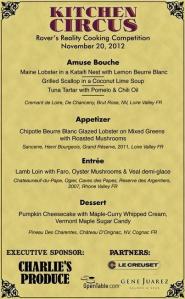 The menu at Rover’s Restaurant includes my amuse bouche and appetizer.

Concocting recipes that measured up to the four-star quality of Rover’s and preparing them for several dozen guests – well that bordered on either moxy or crazy or maybe a little of both. My night – Nov. 20 – I was amped to prepare an amuse bouche and an appetizer, while another contestant made a main entrée and the other a dessert.

Excitement bubbled inside me when I saw my Grilled Scallop in a Chilled Coconut Lime Soup as an amuse bouche and my Chipotle Beurre Blanc Glazed Lobster with Roasted Chanterelles on a bed of Micro Greens listed as an appetizer on the menu. I created these one-of-a-kind recipes that focused on ingredients with sentimental value.

Before I stepped into the kitchen at Rover’s to compete, a makeup artist polished my face and camera crew hooked up a microphone.

The day of the Kitchen Circus competition, I felt as prepared as I could have been after practicing the menu on friends, killing live lobsters and borrowing a professional kitchen to get comfortable with a powerful gas stove.

The late morning started with makeup, excitement and nerves. I tried to stay calm, but with a sinus infection clouding my head, I felt fuzzy.  And I was distracted to say the least – some friends knew my plate was full so-to-speak with a recent death in the family, water in my basement and no heat.

But with cameras in my face and a microphone attached to my shirt, I knew there was no turning back. As soon as we stepped in the kitchen I was ecstatic – I saw my ingredients piled up in my corner of the kitchen.

By 12:30 p.m. I was all about business. I put on my red apron and showed my sous chef, Katy Wentworth, the plan of attack.

There would be no room for error – and we both knew it.  Timing everything was essential. I had a printed timeline with lists and tasks for each of us that would take us right to the edge. With the amuse bouche being served at 6:30 p.m. and the appetizer being served just a half hour later it was going to be a squeeze to get up to 50 plates of each out on time and prepared perfectly. I thought this is what professional chefs do every day, an elaborate dance routine in which every step and move must be perfectly orchestrated with a flawless finish. With my intense game face on, I chopped, grilled and killed.

My seared scallop in a chilled coconut lime soup on the left was one of three amuse bouches served the night of the competition.

But as with anything in life there were a couple surprises I faced throughout the night that forced me to adapt. Two ingredients  – poblanos and coconut cream – were missing. While Chef Thierry Rautureau grabbed pasillas from a nearby store, I separated the coconut milk to capture the cream.

Also seeing only 12 live lobsters I knew we were going to have to use every bit of meat from those beautiful crustaceans. I gave all the lobsters pats on their heads and thanked them for their life, then plunged a large chef knife into each one’s head, driving the blade down and between the eyes. It was a juicy, messy operation. After they went limp, I dipped them into boiling water for a couple minutes. Later we chilled, cleaned and then poach them for the appetizer.

As typical of my nature, I mumbled, rambled and second-guessed some of the flavors. With a sinus infection, the chilled soup tasted to acidic and I was concerned the chipotle glaze might be too spicy for the mild palate of Seattleites. But my sous chef – Wentworth – calmed my nerves with her confidence and relaxed demeanor.

I’m not sure where the hours went, but they evaporated like hot water left boiling on a stovetop. I took a total of about five minutes of break during the day, of which several minutes were bathroom breaks. I was so busy and focused I didn’t even take photos of my own food – that tells you just how intense it was in the kitchen.

Faster, Faster with the Food

As 6:30 p.m. arrived we were plating the amuse bouche. Using tweezers, I placed a thin slice of mango and cilantro on top of a seared and sliced scallop that was wading in spoonful of chilled coconut lime soup. Just as we finished those servings, we were also on deck for the appetizer.

Chef Thierry Rautureau’s positive and intense spirit in the kitchen was intoxicating.

Within minutes we needed to place micro greens on the plate, place roasted mushrooms around them, top the greens with chunks of poached lobster and finish it with a drizzle of chipotle beurre blanc and a sprinkle of pepitas. And this had to be done for more than 45 plates all within minutes. When it comes to plating all of the courses in the competition, all chefs thankfully are on deck, helping prepare the plates so they can be rushed them out the door.

As we assembled the appetizer, I just remember Chef Rautureau saying in his adorable French accent “Christine you are not moving fast enough. Come on Christine, faster.”

The dishes whizzed by me as I added the glaze to the lobsters and inspected each plate.

After finishing the lobster appetizer, I was all smiles in the kitchen, knowing I had challenged myself and survived.

As the last plate left my fingertips, I smiled. I had pulled it off and done it well. All my creativity, practice and skills came together in one day.

The judges, who were the dinner guests, voted and I placed second that night. But I was emotionally soaring like a winner.

In looking back, I realized this experience was more intense than writing a breaking news story.

I was proud that I had stepped out of my comfort zone, tested my skills and succeeded. I plan to do this more in my life, because the rewards are immeasurable.

Stay tuned for my recipes from the Kitchen Circus competition and see how these can be made for one person. Episodes of Kitchen Circus will also be released on the Internet in early spring. A special thanks to all the chefs at Rover’s, their spirit and support in this competition was amazing.

Lights, Camera and Action – the Seattle cooking competition is underway

Today is the day, I’m competing in a reality cooking competition called Kitchen Circus at Rover’s in Seattle. I’ve been creating recipes, practicing my heart out and struggling with a cold, all at the same time. But this Solo Cook is ready to take on the two other contestants today and tonight. We will chop, blend and boil in the professional kitchen and serve food to 45 guests at this amazing Seattle restaurant. As I get ready for makeup and hair – I’ll let you in on a little secret.  No – I can’t tell you what I’m cooking yet or what course I’m preparing. But I can say that there are two emotions stirring in my belly and neither is related to hunger. I’m excited and nervous. As The Solo Cook I’ve been tailoring meals and food experiences for one person. Cooking an amuse bouche and one course for 45 people is a challenge and I’m ready for it. Stay tuned for details of the competition itself.

With a cooking competition looming, it’s a great excuse to buy more gadgets. These cutters are fun to work with in the kitchen while other major equipment is failing. Photo by Christine Willmsen

Kitchen Circus tests you in more ways than one

As my fellow competitors of Kitchen Circus practice and some even compete this coming week, I’m reminded of the lessons I’ve learned already in this cooking competition. I have to prepare an amuse bouche and create a three-course menu soon and chef Thierry Rautureau will pick one course I have to prepare at Rover’s Restaurant for 45 people as well as an amuse bouche. I don’t compete until Nov. 20, but as I tear up my kitchen and run my dishwasher every night I’m reminded this live-cooking contest is no easy task. This isn’t about copying some recipe from Bon Appètit magazine or Betty Crocker’s finest cookbook. This is about creativity, a collective cool head under the heat and pressure of a professional kitchen and FUN. 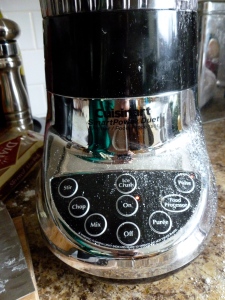 My kitchen is covered in white flour and equipment like this is barely keeping up with my food challenges. Photo by Christine Willmsen

Here are just a couple of insights I’ve learned the hard way recently:

1. Old appliances don’t hold up to the rigors and testing for a cooking competition. Those Goodwill super finds (blender, mixer and other tools that look like your grandmother’s kitchen gadgets) that I discovered in the back of the store and bought several years ago were there for a reason. I dug those out to use occasionally for massive parties, but as I tried multiple recipes in a row I faced groaning motor noises and the smell of burning plastic. I fear major equipment failure will be fast approaching. I better check the smoke alarms and that fire extinguisher in the hallway closet to make sure they’re ready for my potentially flammable courses. And flour has covered my kitchen cabinets and counters more than once. It brings a new meaning to my house being dusty.

Butter makes the food world go around. I eat pretty healthy so I was shocked to realize how much butter is needed for desserts and sauces. No wonder they are so good. Photo by Christine Willmsen

2. Kitchen Circus gives me the excuse to buy new gadgets. I bought these cutters and have had so much fun with them. But I’m not sure they’ll be useful for my final idea for a dessert. I hate surprises but I love planning them. You’ll just have to wait and see.

3. Butter, cream and eggs. That’s really what makes the food world go around. I’m shocked at how much butter is put into desserts and other courses. I love it BUT.

4. That brings me to my next insight. BUT really is BUTT, which is a result of BUTTER. A friend told me to be leery of the competition because I may gain a few extra pounds as I test my concoctions. I shrugged it off, and then that night I shocked myself as I licked spoons of raw batter and sucked down extra portions and leftovers. I didn’t want to waste anything, and the little girl in me was suddenly cleaning the utensils, folks and spoons with my tongue. Even though I’ve given much of my trial food items to friends or coworkers, my friend was right. I have put on a little padding during the practices. Damn butter.

It is my responsibility to clean up the kitchen including the utensils, so like any smart resourceful home cook, I lick the cake batter off. But my butt is paying for it. Photo by Christine Willmsen