David Lee started Field Roast in 1997 and created FareStart in 1988.

David Lee, the creator of Field Roast and FareStart in Seattle, has many ideas and perspectives on food and he’s not afraid to share them. And there is one thing this vegan and I, a meat lover, have in common – we want people to learn about food and enjoy cooking it.

“We’ve lost our center,” said Lee during an interview and tour of his facility. “We’ve taken the presence out of cooking.”

“I want to teach people to cook for their daily lives, there’s a lot of people out there living alone.”

My response was – EXACTLY. That’s part of my mission too.

After years of working in the film industry, Lee wanted to take a different path.

“I wanted the creative pursuit on my own terms,” he said. And at that point – in 1997 – the seeds were planted for Field Roast, a grain-based food company he started after wanting to make a vegetarian teriyaki wrap.

Lee is also known for creating FareStart in 1988. This successful program serves healthy meals to Seattle’s homeless and disadvantaged and trains some of them to become chefs and support staff in the food industry through its job-training program.

But Lee doesn’t want to be known as the Field Roast guy or the FareStart guy.

And he wants YOU to cook too.

“You come home from work and you are tired, but you are assembling food and not cooking it,” he said.

That can be me some nights as a single person who obviously has no personal chef on hand (oh I’m interested in hiring one, especially a handsome man with good knife skills).

But recently I’ve become more conscious about what and how I cook. I’ve noticed, in the United States, that our default for food is quick and easy. This is not some breaking news story – many have written about the topic.

People grab a can of soup from the shelf, plop a processed meal into the microwave, or pull out a sodium-laden frozen meal that claims all the food groups in a plastic container. These are foods we merely assemble, but don’t cook or prepare.

For all the single people out there, I want to help you cook easy meals after a long day through my blog, and I promise if you cook some of my recipes they won’t look like shit on a shingle.

Lee said, “we need to spend more time feeding ourselves – it’s how we are taking in the earth and the sun.”

For some people that idea may be a little too philosophical, but I get Lee’s message.

Fresh ingredients are the key to Field Roast products 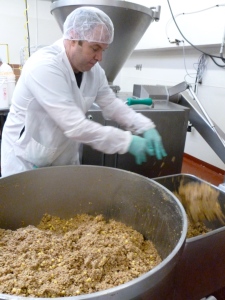 During my tour, there were employees measuring batches of fresh ingredients, while others were swirling the sweet-smelling ingredients in large vats and still others were pumping them into a machine to make sausage. 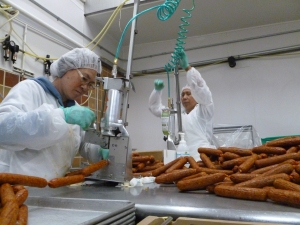 With just 50 employees, Lee has grown an idea into a full-fledged successful company that offers vegan food products like roasts, cutlets and cheese. They distribute numerous products in all 50 states, including my favorite, which are their sausages.

Field Roast employees label and package Mexican Chipotle sausages that are shipped throughout the United States.

I like the Mexican Chipotle sausages made with grain meat and a spicy-hot blend of smoked Chipotle peppers, Chili de Arbol peppers, fresh chopped garlic, sweet onions seasoned with cumin seed and oregano. These can be made into tacos and quesadillas. Field Roast also has some great recipes for their other products.