A Recipe for Breaking my Fear of Fowl 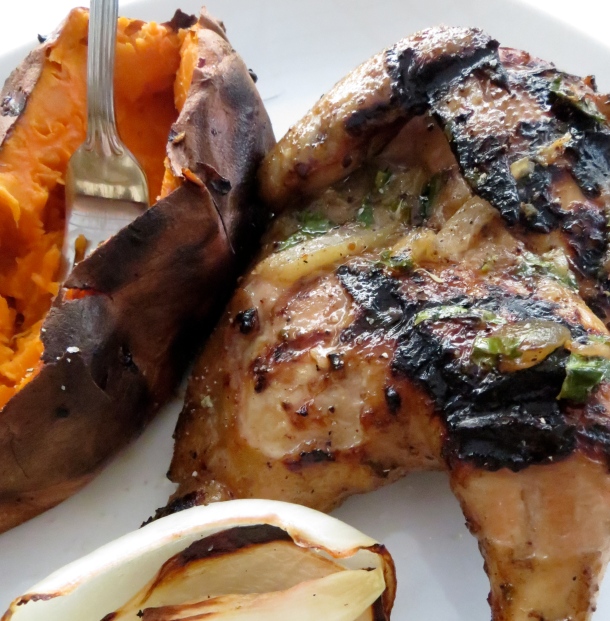 Challenge yourself by grilling Cornish game hen. You’ll discover just how easy it is to cook. Photo by Christine Willmsen

Most of us have foods we hate or food phobias. My friend Shannon can’t stand olives, and Patty believes beets taste like dirt. Mine has not been a hate of fowl, just a fear of it – fear of getting sick by eating undercooked poultry. What are your food fears?

Childhood memories can taint our palate

Let’s step back about 35 years to me as a child. My family had the philosophy of we eat what we cook, no arguments. I would whine, fight and hide my shriveled peas and the over-cooked, fatty, cheap steak that tasted like rawhide.

This Cornish hen is the perfect size for dinner and leftovers. Photo By Christine Willmsen

Summer in Iowa meant juicy tomatoes, corn on the cob and grilled lemon chicken. When served a chicken breast and a leg, I took a big bite and discovered veins, tendons, bones and very pink meat. I complained to my parents that the chicken was raw and that I would get sick. My parents had no compassion, saying I had to finish eating the chicken, including all the meat near the bones. I don’t recall if I ever got sick, but since then I’ve had a fear of plunging my teeth into a piece of fowl.

In fact for years I couldn’t eat any meat on a bone, fearing the meat was raw and I would get sick. No BBQ ribs and no chicken wings. Boyfriends would cut the meat off the bone for me, and other times I would order boneless poultry. I was unable to cook a full-size chicken, let alone pick it up with my bare hands and take a bite.

Cornish Game Hen for one or two people

Now it’s time to break my food phobia by getting to know the bird on a raw level and making my own recipe.

I bought a Cornish game hen, a small bony fowl that’s a perfect dinner for one or two people. I cut it in half, right down the breastbone, flattening it a bit with my hands, hearing the bones crunch. I marinated the two halves in a combination of fig and lemon preserves, parsley, cloves and other spices.

I can finally say I broke my fear of cooking small fowl and eating it. But you still won’t catch me gnawing on chicken wings. I hope this helps you take risks with food.

Hot in the Kitchen: Grilled Lemon and Fig Hen

Marinate the two halves of the hen for at least two hours. Photo By Christine Willmsen

For side vegetables, add a sweet potato and half onion to the grill.

Cut the hen in half, rinse with water, pat dry and flatten with hand. Mix all the remaining ingredients together and then marinate the two halves for at least two hours. On a two-burner grill, heat to medium or 400 degrees and set the other burner on low. If using a charcoal grill, put coals on one side of the grill to create the same effect. Coat the grate with olive oil. Cook skin side down for 6 minutes on medium, then move it to the low temperature area of grill for 8 minutes. Flip the two pieces and cook on medium for 6 minutes and then 8 minutes on low. Total cooking time should be about 28 minutes. The internal temperature on the thigh should be 165 degrees and juices should be clear. Let the hen rest for several minutes before taking a bite.

Cheers to conquering our food fears