Recipe for Kale and Leek Pancakes 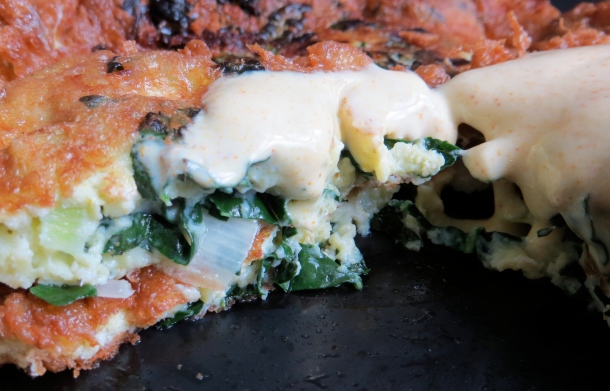 The tumeric topping on the kale pancakes adds depth. Photo by Christine Willmsen

Kale is the IN food when it comes to cooking. So I created two recipes to urge you to buy a bunch of kale and try the bold, deep, green vegetable that most people set aside because it’s used mostly as a garnish. This recipe combines kale and leeks to create a pancake for brunch, lunch or dinner.

Another way to use the rest of your kale bunch is to make a breakfast kale smoothie that is full of Vitamin A, C and K. If you are adventuresome in the dirt, plant kale in your garden. It can grow in the Pacific Northwest during the fall and winter months and is also available at grocery stores. I used the kale and leeks from Oxbow Organic Farm, a 25-acre vegetable garden near Carnation that sells its produce at farmers markets, restaurants and to weekly subscribers.

Hot in the Kitchen – Kale and Leek Pancakes

Fry two minutes per side

Mix kale, leeks, eggs, water, salt, pepper and cheese together in bowl. In a frying pan, heat peanut oil on medium high until pan is hot. Use a half cup measuring tool to gently drop the mixture into the oil. Cook for two minutes on medium high until brown, using a splatter guard if grease starts to jump. Flip and cook another two minutes. Place on paper towel and drop the rest of the batter into the pan and repeat. Mix sour cream, yogurt, turmeric and dash of salt together and add dollop to the top of the pancakes.

About The Solo Cook

An award-winning journalist with a passion for food. A writer and speaker who hopes to inspire everyone to take adventures with food. If I'm not cooking, I'm not happy. I started this blog to inspire single people out there to cook and experience food.
View all posts by The Solo Cook »
← Energizing Breakfast Kale Smoothie
Sweet Superbowl Party Peanuts →